A downloadable game for Windows, macOS, and Linux

"The Inquisitor" is my entry for 2014's ProcJam games jam. In it you must solve a procedural generated murder by gathering evidence, questioning witnesses & determining the murderer, the means and the motive.

It's pretty difficult and obtuse, so I recommend taking notes as you play to keep track of where all the rooms are, and what the characters say when they dictate their alibis & suspicions. Difficulty of the murder varies wildly depending on what the murderer does - Sometimes they drop all the evidence right in front of you, other times it can get cleaned, picked up by other people and shuffled around. If all else fails, take notes! And read the hints on the title screen!

Controls are Arrow keys/WASD to move, E/Z interact/confirm, Q/X cancel/dismiss, 'i' brings up your collected evidence, and 'j' begins the accusation process. You need at least one collected weapon to begin the accusation process, and to 'win' you must correctly guess the murderer, have the weapon they used, and determine their motive.

At the end of each game, the true murderer will reveal their movements.

(Apologies for the weird controls & large resolution, didn't have time to make things a bit more friendly in these departments)

~ Additional sneaky hints (Read if you're having trouble ~

- Everything happens in increments of 5 minutes, so it takes 5 minutes to move between rooms.

- The witness standing at the crime scene will never be the killer.

- Examining the body will give you a window into the time of death. Listen to people's alibis and suspicious observations with relation to this time and you might spot someone who's near the crime scene during this time.

- There are 4 people with motives to kill. You can determine them by asking people or finding incriminating evidence, however you may not always get the full story.

- People will have a habit of grabbing stuff and hiding stuff all over the place. Generally, overactive picker-uppers and putter-downers aren't the murderer - The murderer has a more focused objective and will generally only pick up the murder weapon before the murder takes place.

- Incriminating letters cannot be cleaned, so if you find one stained in something, there's a good chance it was originally at the crime scene carried by either the victim or the murderer.

- The party etiquette dictates a jacket be worn at all times. Wandering about without a jacket (because say, it's got blood all over it) on is considered suspicious.

- The Murderer will never reveal they entered the crime scene, but their alibi movements may contradict anyone else that saw them.

- Pay attention to the wounds to determine what kind of weapon was used. Wine stains everywhere? There'll be a smashed bottle nearby that's the murder weapon. Vomit stains everywhere? Poison is involved. Cracked bones? Possibly a blunt object like a hammer or mace.

- Every room name is unique, as is every first and second name for people. This can help with using shorthand for note taking. 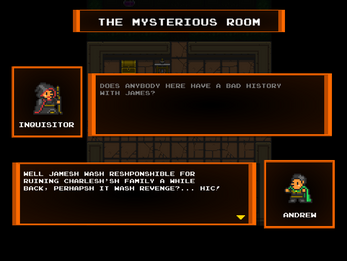 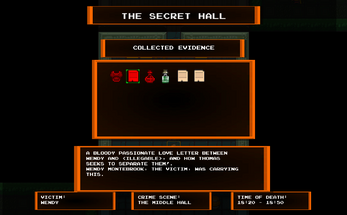 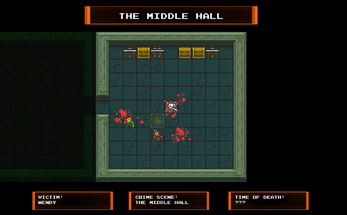 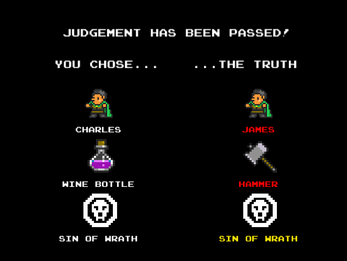